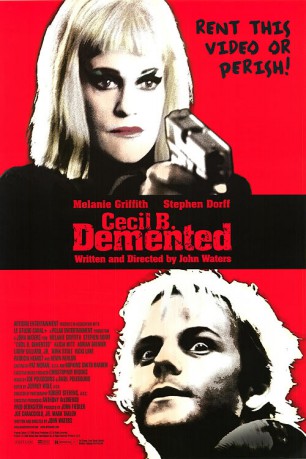 In Baltimore, guerrilla filmmaker Cecil B. Demented leads a band of cinema revolutionaries who kidnap Honey Whitlock, a bitchy and aging movie star of big-budget froth. Cecil wants her in his movie, a screed against Hollywood they film during blitzkrieg attacks on a multiplex, a Maryland Film Commission press conference, and the set of a "Forrest Gump" sequel. He insists on celibacy; the cast and crew channel sexual energy into the production. With a family-values coalition, aggrieved Teamsters, and the police on their trail, Cecil needs help from porno, kung-fu, and drive-in audiences. What about Honey? Will she bolt or refuse to act? Or will she hit her marks and light up the screen?