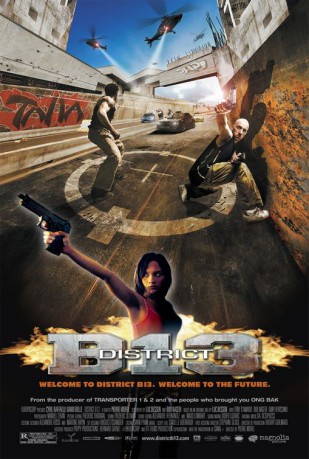 In the near future, the worst ghettos of Paris, France are literally walled off and among the worst is District B13. Controlled by the ruthless crime lord, Taha, a young righteous punk named Leďto is determined to bring him down. When the boss retaliates by kidnapping his sister, Lola, a rescue attempt by Leďto is destroyed by betrayal that gets him arrested and Lola kept in the clutches in Taha. Six months later, a crackerjack undercover cop named Damien is given a urgent mission: a neutron bomb has been stolen by Taha in District B13 which has an automatic timer function engaged and set to detonate in less than 24 hours. Now with time running out, Damien and Leďto must work together to find and stop the bomb, but there is far more to this crisis than any of the field players realize.